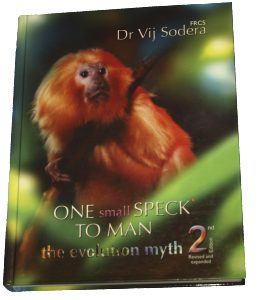 If you are a non-UK resident, you can purchase this book from the store at creation.com

Was our great….great….great….great grandfather an ape? This is the question that this book sets out to answer.
This truly outstanding work is the only book of its kind, and provides a unique insight into the living world. And it will make you think.
QUESTION EVERYTHING.

It is taught almost universally that humans have evolved from ape ancestors, and that chimpanzees are our distant cousins. Indeed, many biologists are quite happy to classify themselves as being no more than just another species of chimpanzee.
Certainly, to the casual observer, it might seem quite plausible that a few modifications to the brain, face and body of a chimpanzee could result in a human being. However, the question that needs to be addressed is whether or not such modifications can be achieved by the blind processes of genetic mutations and natural selection.

Look at a speck of dust on the table in front of you.
Given the time span of a few billion years, is it possible for such a particle, being composed only of simple molecules, to rearrange its structure, to join with other simple particles, and to acquire consciousness – ultimately, to peer down on another dust particle and to contemplate its origins?
Yet inherent in the idea of evolution by natural selection is the assumption that not only is this possible, but also that it actually happened.

In this book, whether discussing dinosaur or bird fossils, muscle fibres or antibiotic resistance, limbless lizards and limbed snakes, or ape and human anatomy, the concept of evolution is addressed logically and purely scientifically, and every subject matter is fully illustrated, including photographs, diagrams, drawings and x-rays.

There is no gallery selected or the gallery was deleted.

This site is protected by wp-copyrightpro.com